The "incremental approach" towards same-sex marriage. 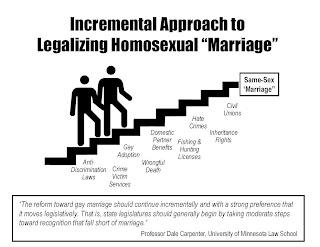 "The reform toward gay marriage should continue incrementally and with a strong preference that it moves legislatively." Prof. Dale Carpenter, University of Minnesota School of Law

A new bill (SF 960) has been introduced in both houses that would allow local government to extend benefits to same-sex couples. Sounds harmless until the bill is placed in the broader perspective of achieving same-sex marriage via incremental steps in the state legislature.

After suffering a series of stinging defeats last July, supporters of same-sex marriage changed their tactics from constitutional lawsuits to smaller, incremental gains in state legislatures. SF 960, is a perfect example of this incremental approach. In fact, the bill is one of nine legislative proposals being pushed by OutFront Minnesota this legislative session.

The question is: Will passing this bill, and/or all of OutFront's legislative proposals, bring any closure to the same-sex marriage debate? The answer is a resounding no!

States that have compromised by legalizing domestic partnerships or civil unions for same-sex couples have learned "There can be no compromise..." until full marriage is achieved. This bait-and-switch scheme is currently raging in CT, VT and New Jersey.

Legislators, and the people of Minnesota need to understand that this bill, and the OufFront agenda, is not compromise. Instead of closure, passage will put same-sex marriage supporters one step closer to achieving same-sex marriage - exactly what many legislators say they oppose.

This is why Minnesota needs a marriage amendment, and why MFC will be going into the districts of the bill sponsors and educating their constituents about the intent behind this agenda.

Just as "civil union" is marriage by another name, "incremental step" is the slippery slope towards same-sex marriage.

Last session many legislators said they supported traditional marriage - but opposed a marriage amendment. Now we call upon them to demonstrate that support by withdrawing support for SF 950 and HF 1097, and the broader strategy of obtaining same-sex marriage through incremental legislation.

Marijuana bill nothing but political hash

SF 345 reads like it was written by a baby-boomer who once supplied friends and acquaintances with pot grown in a basement, grow light hideaway. Here’s how it works. Once approved by the “commissioner of health”, a “primary care giver” (as young as 18) may grow a maximum of 60 plants to supply marijuana to no more than 5 qualifying patients. This means, depending upon the yield, the 18 year-old may legally grow enough pot to produce approximately 27,000 to 136,000 joints. Enough to smoke 73 to 372 joints a day for 365 days.

However, according to testimony by Mr. Neal Levine of Minnesota for Compassionate Care, a group lobbying for the legalization of medical marijuana, these limits don’t “produce that much [marijuana]” and there is “debate” whether they are sufficient to meet the patients needs.

“Take a look at the label of a prescription bottle,” testified Tom Prichard of the Minnesota Family Council. The label identifies the name of the drug, potency, dosage, frequency, refills, interactions, side-effects, prescribing physician, cautions and even has a child-proof cap. "To put this in perspective, if you wanted medication for your child to relieve pain and suffering would you use a drug approved by the Minnesota state legislature or the FDA?" he said.

Conflicting testimony
Throughout the hearing, supporters of the bill couldn’t make up their minds if the smoking of marijuana was harmless or a killer. One moment DFL Senator Murphy declared a witness who had testified to having used marijuana as a “picture of health,” and the next, DFL Senator Higgins stated that marijuana was for “…folks who are terminal. This is not for people thinking about what their health will be like in a couple of years,” she said.

Political hash based upon ideology
Terminal or picture of health, Mr. Levine offered the most candid testimony when he admitted the decision to legalize marijuana was political, not medical. MFC urges Minnesotan’s to call their legislator and tell them to vote against SF 345.
Posted by Chuck Darrell at Friday, February 23, 2007

Over the last few weeks, I've testified several times at the state legislature. A couple of times opponents of liberal legislative proposals have been severely limited in their ability to present their views, while proponents are given ample time.

In a hearing before Representative Greiling's K-12 Finance Division, they heard several bills calling for expanding half day to full day kindergarten. Normally, proponents testify then opponents. Usually, both sides are allowed to make their case. In this instance, a stream of proponents testified, then they fielded questions from the committee. Then at the very tail end of the committee hearing, they allowed myself and another opponent

to speak. They probably gave us five minutes, or a fraction of the proponents' time. I had to condense my remarks down to a couple of quick comments. The committee hearing was then quickly ended.

The next example was before the House E-12 Education Policy Committee. The topic was Advanced Placement and International Baccalaureate programs. I was there to testify against IB because it is really a form of the profile of learning, e.g. vague, affective, social agenda oriented curriculum and very costly. Here again ample time was given to long list of proponents. I and Allan Quist, who opposed it on behalf of EDWatch were given a few minutes at the tail of the bill hearing. Then interestingly, after my testimony was cut off by the chairman, another proponent was invited up to rebut my testimony.

I get the distinct feeling, they don't want to hear our side of these issues.
Posted by Minnesota Family Council at Thursday, February 22, 2007

Promote Your Page Too